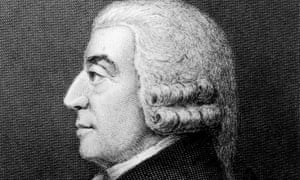 1776 was an annus mirabilis for English and American prose, a year to compare with 1859 (Darwin’s On the Origin of Species; Dickens’s A Tale of Two Cities; Mill’s On Liberty). In February, Gibbon published the first volume of his The History of the Decline and Fall of the Roman Empire; while in March a brilliant intellectual, a star of the Scottish Enlightenment, single-handedly invented the subject of modern political economy with An Inquiry Into the Nature and Causes of the Wealth of Nations which swiftly became established in the minds of intelligent readers as The Wealth of Nations. When the first edition sold out in six months, the story went round that another celebrated Scot, the philosopher David Hume, was now joking that The Wealth of Nations probably required too much thought to be as popular as Gibbon’s Decline and Fall.

Gibbon, in fact, was full of generous praise for his rival. He wrote to the Scottish historian and philosopher Adam Ferguson: “What an excellent work is that with which our common friend Mr. Adam Smith has enriched the public! An extensive science in a single book, and the most profound ideas expressed in the most perspicuous language”.

Smith’s work, indeed, was every bit as singular as Gibbon’s. Although it provided a comprehensive and magisterial treatment of its subject, it was also a work of robust common sense, intelligible to any careful reader, braiding history, philosophy, psychology, and sociology in a compelling tapestry of theory and experience. Smith, writes one commentator, was concerned to improve “the human condition in practical ways for real people”. This was a book that had begun as a series of lectures delivered to audiences in Glasgow. Smith’s friend Hume, joking aside, declared that the book had “depth and solidity and acuteness, and is so much illustrated by curious facts, that it must at last take the public attention”.