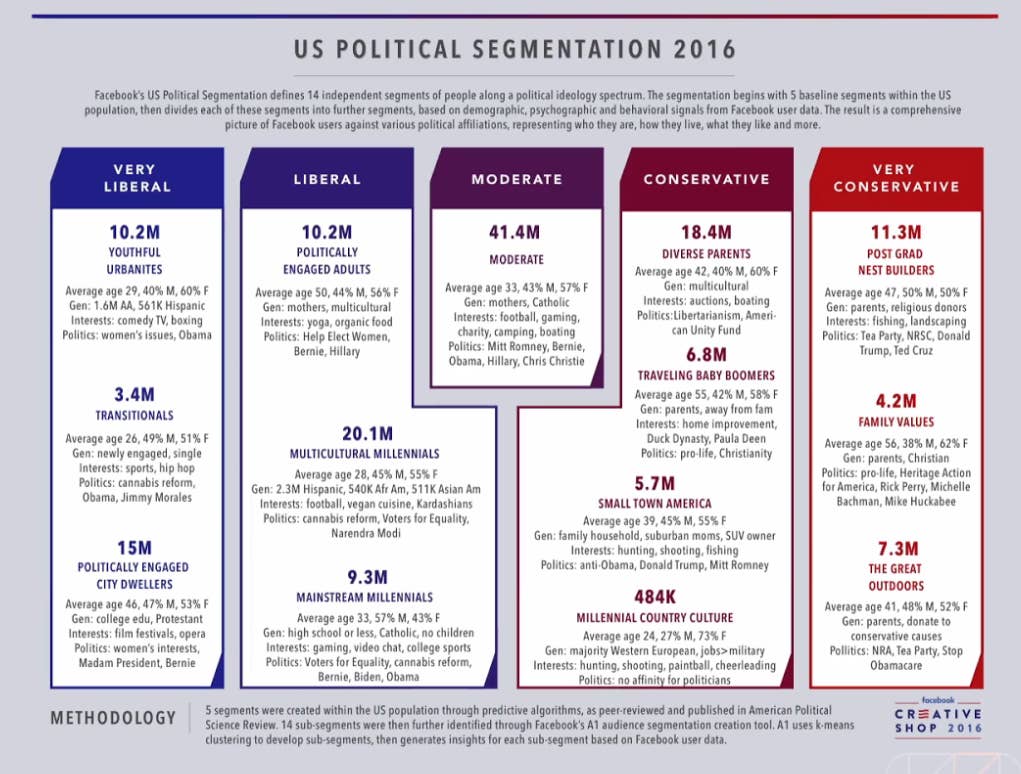 During the 2016 election season, Facebook provided political advertisers with a targetable breakdown of a fractured United States, which could’ve been used as a blueprint for exploiting the country’s divisions.

According to a political advertising sales pitch obtained by BuzzFeed News, Facebook carved the US electorate into 14 segments — from left-leaning “youthful urbanites” to a pro-NRA, pro–Tea Party group it bizarrely labeled as “the great outdoors.” It detailed their demographic information — including religion and race in some cases — and offered them to political advertisers via Facebook’s sales teams. For advertisers using Facebook’s self-serve platform, the segments could be reached by purchasing larger bundles ranging from “very liberal” to “very conservative.”

“We typically help marketers across all verticals understand audiences this way, and we briefly used this framework to help inform how a small number of marketers built their campaigns,” a Facebook spokesperson told BuzzFeed News, adding the pitch had been removed as part of a “regular refresh.” Said the spokesperson, “these segments are no longer available.”

A senior Democratic operative who’s run extensive digital political campaigns suggested political targeting options of the sort Facebook offered might be particularly intriguing to people looking to sow discord in the political system. “Any legitimate, aboveboard organization that is trying to actually win an election is going to have a much higher set of standards,” the operative told BuzzFeed News. “This type of approach is almost exclusively designed for nonpolitical professional people who want to mix it up,” or cause chaos.

Campaigns looking to win elections, the operative said, would likely target more sophisticated, granular segments built using voter file and email data. But to those without access to proprietary data, the targeting options Facebook detailed in its pitch could be appealing.

“Small town America,” one of the segments, was made up of 5.7 million people who were “anti-Obama,” for instance. A bad actor looking to sow division in the country might use such information to create ads exploiting some people’s disdain for the then-president.

A person familiar with the Trump campaign’s Facebook operation told BuzzFeed News the campaign used some the company’s broader targeted categories — such as “conservative” or “very conservative” — during the US 2016 presidential primary in an effort to spread Trump’s message wide and take advantage of cheaper ad rates. The Trump campaign went on to use microtargeting on a more specific basis than Facebook’s categories allowed for during the general election.