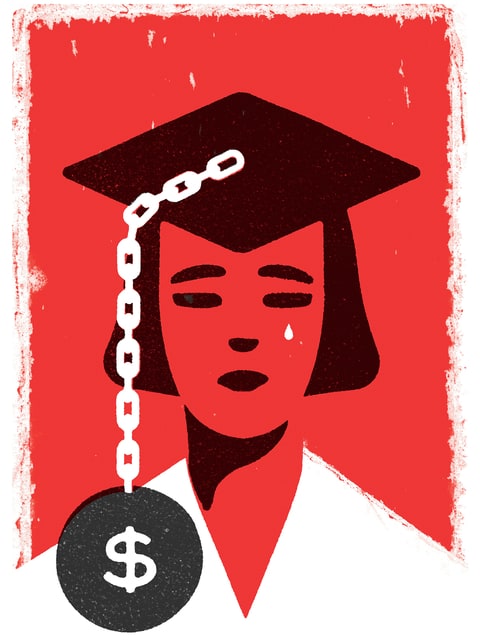 On a wind-swept, frigid night in February 2009, a 37-year-old schoolteacher named Scott Nailor parked his rusted ’92 Toyota Tercel in the parking lot of a Fireside Inn in Auburn, Maine. He picked this spot to have a final reckoning with himself. He was going to end his life.

Beaten down after more than a decade of struggle with student debt, after years of taking false doors and slipping into various puddles of bureaucratic quicksand, he was giving up the fight. “This is it, I’m done,” he remembers thinking. “I sat there and just sort of felt like I’m going to take my life. I’m going to find a way to park this car in the garage, with it running or whatever.”

But he graduated with $35,000 in debt, a big hill to climb on a part-time teacher’s $18,000 salary. He struggled with payments, and he and his wife then consolidated their student debt, which soon totaled more than $50,000. They declared bankruptcy and defaulted on the loans. From there he found himself in a loan “rehabilitation” program that added to his overall balance. “That’s when the noose began to tighten,” he says.

The collectors called day and night, at work and at home. “In the middle of class too, while I was teaching,” he says. He ended up in another rehabilitation program that put him on a road toward an essentially endless cycle of rising payments. Today, he pays $471 a month toward “rehabilitation,” and, like countless other borrowers, he pays nothing at all toward his real debt, which he now calculates would cost more than $100,000 to extinguish. “Not one dollar of it goes to principal,” says Nailor. “I will never be able to pay it off. My only hope to escape from this crushing debt is to die.”

After repeated phone calls with lending agencies about his ever-rising interest payments, Nailor now believes things will only get worse with time. “At this rate, I may easily break $1 million in debt before I retire from teaching,” he says.

Nailor had more than once reached the stage in his thoughts where he was thinking about how to physically pull off his suicide. “I’d been there before, that just was the worst of it,” he says. “It scared me, bad.”

He had a young son and a younger daughter, but Nailor had been so broken by the experience of financial failure that he managed to convince himself they would be better off without him. What saved him is that he called his wife to say goodbye. “I don’t know why I called my wife. I’m glad I did,” he says. “I just wanted her or someone to tell me to pick it up, keep fighting, it’s going to be all right. And she did.”

From that moment, Nailor managed to focus on his family. Still, the core problem – the spiraling debt that has taken over his life, as it has for millions of other Americans – remains.