Neither Precise Nor Proportionate 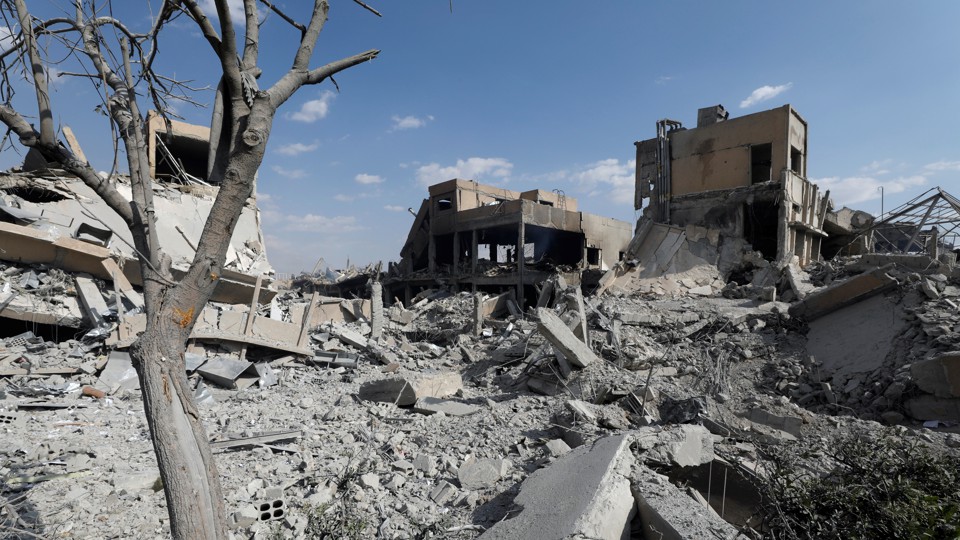 “Precise and proportionate” is how Secretary of Defense James Mattis described the recent shower of missiles that fell on three targets in Syria. Precise, possibly, although anyone who has dealt with them knows that smart weapons often do dumb things. But proportionate? On that one we should trust the words of poets, not generals:

Avenge! No such revenge—revenge for
the blood of a little child—has yet been
devised by Satan.

Thus wrote Chaim Nahman Bialik after the Kishinev massacre of 1905. Proportionality, in this case, would require asphyxiating Bashar al-Assad’s children slowly with chlorine gas, and making sure that the world knows about it. We do not do such things.

What did we do, instead? “We believe that by hitting Barzeh in particular we’ve attacked the heart of the Syrian chemicals weapon program,” said the director of the Joint Staff. Parse those words: “we believe” (not, “we know”); “we’ve attacked” (not, “we’ve destroyed”: throwing a rock counts as an attack); “the heart of the Syrian chemical weapons program” (not their stockpiles, not their scientists, not their decision-makers, not their munitions handlers, not their pilots, not even necessarily all or even most of their laboratories). Military people know, none better, how to be precise when they wish to be. The art of command rests in part on accuracy and concreteness. The Pentagon’s language here tells you that the generals know better, but that they are being molded by the American President.

Who is, one has to say, utterly juvenile in his approach to war. He was motivated by a horror of children being poisoned, as he was earlier on in his presidency. Pictures can motivate him to act, but the abstraction of hecatombs of corpses does not. Chemical weapons he views as horrific, but somehow the power drills, the electrodes, the hot irons, the piano wire, the hooks, the bombs filled with nails, for that matter the knives, do not. He boasted about shiny new missiles and telegraphed his punch in time for the Syrians and their allies to prepare for the blow. And when it was all over the inevitable tweet “Mission Accomplished”—a piece of triumphalist idiocy. At least when President George W. Bush spoke underneath a banner with those words it was the sailors who had asked to put it up, not his communications team, let alone the president himself.

This attack was unserious but intended to relieve emotional pressure, a kind of martial onanism masquerading as strategy. Its effects can be compared to the police coming upon a mass murderer, cited multiple times for firearms violations, reloading his AR-15 in the midst of a massacre. The cops step past the twitching bodies, take the weapon, eject the 30-round magazine, take out half a dozen bullets, and return the remainder and the weapon to the murderer with a stern look. They then swagger back to the squad room shouting, “Showed him, didn’t we!”