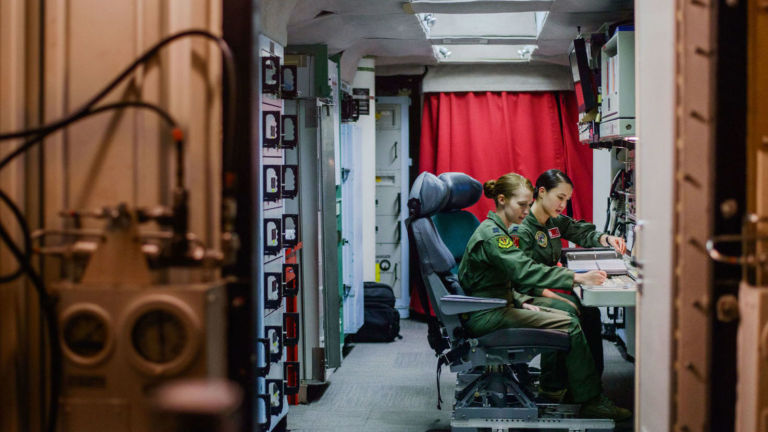 The capsule is the size of a shipping container. At one end is a single bunk sectioned off by a red blackout curtain. At the other is a stall with a toilet and sink, like an airplane bathroom. The air feels that way, too: recycled and somewhat stale.

When you’re inside these walls, you’re 60- to 80-feet below ground, down a groaning freight elevator and through two blast doors, the second of which weighs eight tons and can only be opened from the inside. You’ve crossed from a dank antechamber over a small walkway into a completely isolated space, suspended within the Earth’s crust so it can survive a near-miss blast.

It’s from this capsule (and dozens of others exactly like it, spread across the Western United States) that the Air Force’s Nuclear and Missile Operations Officers, more casually known as “missileers,” monitor and control our country’s collection of 450 nuclear-capable intercontinental ballistic missiles (ICBMs). The officers who do this job work rotating 24-hour shifts, seven days a week, 365 days a year.

At any given moment, 90 missileers are sitting on alert, or “pulling crew,” as it’s known in Air Force parlance. Though women are notoriously underrepresented in the U.S. Military, the Air Force is better at gender equality than the other branches—there’s a disproportionally high number of women in this role. By March 2016, the Air Force had enough of them to schedule an all-female alert.

‘It requires a lot of discipline,’ Captain Marian Dinkha (left) says of the job.
Tyler Joe

The missileers’ mission: Ensure that the world’s most consequential weapons are infallible and ready to launch on command—a not-so-gentle reminder to our adversaries that it would be, to put it mildly, a really bad idea to attack the United States.

Shania Twain walked out on top. Now she wants back in Flying coach is so cramped it could be a death trap